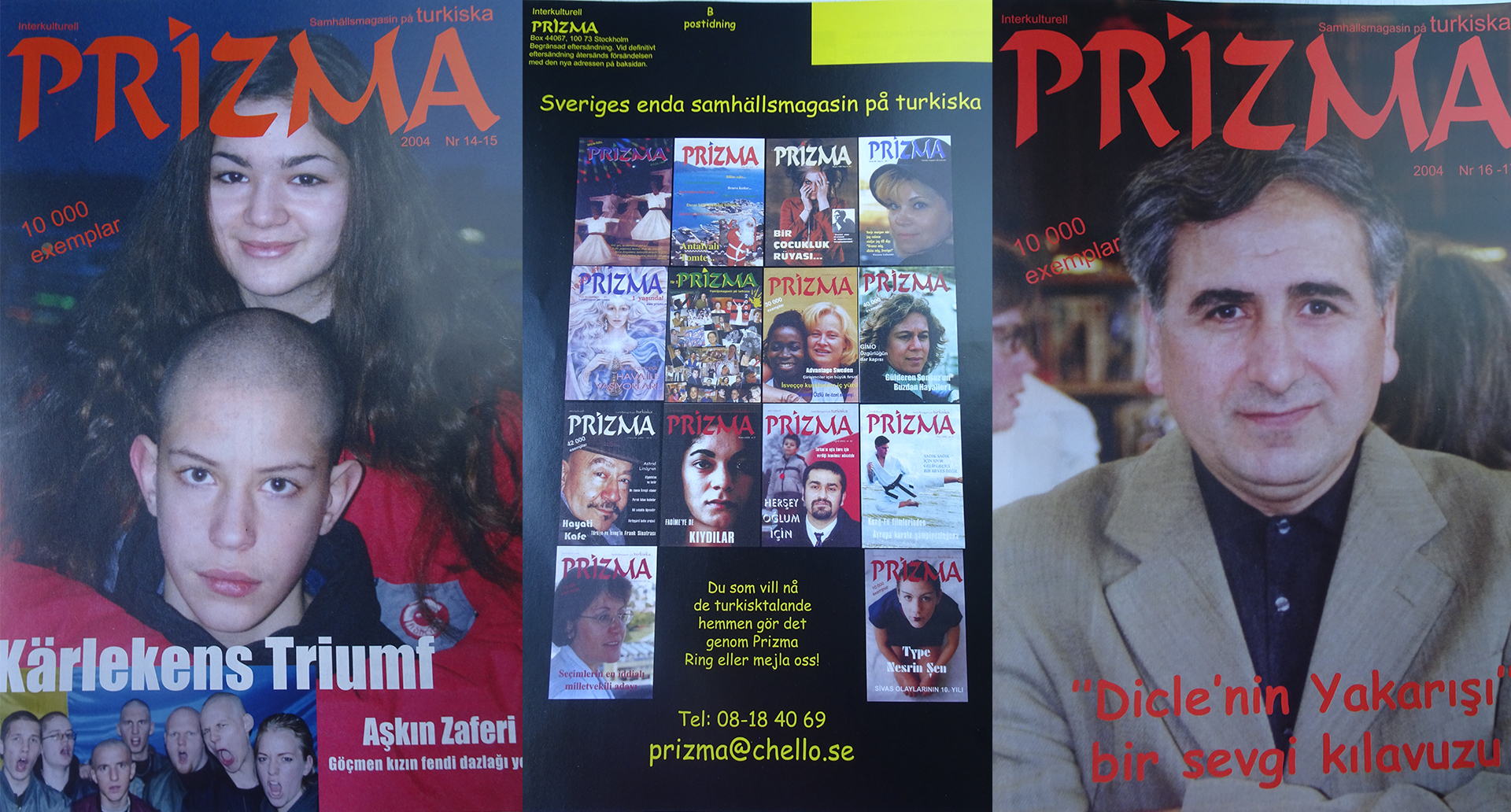 While Sweden champions the role of community media in the Third World countries  its own ethnic minority media is neglected and  suffocated. A new report now urges the government to extend the services of its Press Subsidies Council to benefit  minority press as well.

Believing in the role mass media can play in furthering  integration in Sweden Turkish journalist Dilek Yaras started  a magazine called Prizma: ” Turkish people are like powdered sugar. They are scattered mentally and physically. Separated from each other and from the new society they live. With Prizma we may stop the isolation trend ” she said during the launch 4 years ago.

In many ways Ms Yaras, has seen her dream come true. Printed in colour Prizma has achieved popularity with its coverage of issues affecting Turkish minority in Sweden as jobs, schools, food, sexuality and politics. One of her editions featured debate in the aftermath of  ”family honour”  killing last year of a  young Kurdish/Turkish woman who rebelled by dating a Swedish man. The murder shocked the Swedish society that’s still very homogenious; with some critics wanting  curbs on the liberties of a multicultural society.

In deed, with the growing Ismaliphorbia after the September 11 and the impeding USA invasion of Iraq Yaras senses the ever more greater need for  platforms such as Prizma to help Moslem communities abroad ventilate perspectives on these development:  ”As usual Swedish mainstream media doesn’t offer opportunities for a broad and diverse opinions ” she says  citing readers’ response in Prizma. Naturally with a growing readership and loyalty Yaras would have prefered to increase the circulation of Prizam-currently 10,000-given the large number of Turkish speaking about 70,000. It could be turned into a profitable publishing enterprise offering jobs for example.

Fellow Turksih journalist concurs:” It’s  self-evident Turks need publications  which can improve their access to  all kinds of  information. I would say that the Turkish community can  do with more publications  because Turkish people have seen several generations grow  since they first came here in large numbers as guest workers in the  60’s and 70’s.  For this reason there’s a  need for writers who can tackle issues seriously and offer  in-depth analysis ”says Tandogan Uysal Stockholom correspodent for Hurriyet the leading daily newspaper in Turkey.

For serving pluralism, democracy and empowering the voices of  marginalised social groups, Yaras type of journalism resembles the dissident press in the former Eastern Bloc.Its very fired by the idealism of the grassroots community media projects now mushrooming across Africa, Asia and Latin America-the new Global South. These projects are  funded by Western aid  organisations to help consolidate the processes of  multiparty democracies according to Unesco, Ford Foundation and bilateral aid agencies such as Sweden’s Sida who have significantly boosted financing for community media over the last 10 years channeling the money through the Non-governmental organisations (ngos) who are at the frontline for developing alternative voices to the government -owned media establishment.

Charles Nyambuga, a lecturer at Maseno University in Kenya articulates the role of the community empowerment media as one of the defining characteristic of the global media development after the end of the Cold War  in 1989:  “Advocacy journalism” he says, “is the in thing with Western donors.Funding for  community media journalists especially those raising awareness about  the voiceless people,  gender equality and poverty eradication has become the most popular concept.

Its one of topics defining the so-called  new global media agenda ” he stated at the end of a discussion paper reviewing the prospects of reviving the debate termed New International Information and Communication Order (NWICO) which sought the remedies for the information imbalance between the West and the Third World countries during the Cold War era.

If Prizma were located in say, Kenya, or more appropriately Turkey – a country often at loggerheads with the West over the freedom of the press and persecution of reporters – Prizma’s role would most likely have found favour and splashed with cash from the Western development aid agencies.

On the contrary, Yaras and many of her colleagues publishing for the ethnic minority communities in Sweden the going is tough because institutional support is almost zero leave for the occasional cultural grants that are paltry sums.

A country with a reputation abroad for  generosity and with a press subsidies tradition that is enjoyed by even the strongest commercial and independent media conglomerates the paradox of Sweden’s negligence of her own ethnic  minority media is hard to comprehend. Last year, for example,  Sweden’s second largest daily newspaper, the conservative Svenska Dagbladet ,bagged  more than Sek 500million from the state kitty.

Comments Yaras: “I know of those subsidies but I also know that the Swedish organisations as the Swedish Trade Unions are always helping journalists in Turkey.  This is not bad in itself and I am not oppose to it.  But it surprise me that we are not getting such kinds of solidarity. I fail to understand this because the principles of solidarity should be universal .“

She said sounding almost bitter during an interview in the seating room of her council flat that also serves as an office. She shares the flat with her family. Yaras rolls herself into playing multiple responsibilities in order to get the paper out – reporter, editor, advertising rep and subscription clerk: ”This working situation is so hopeless. I am really overworked and  I do not know if I can continue slogging away any longer. The future is pessimistic ” she notes pointing at the last issue of Prizma featuring the Swedish General Elections last September:” You can see  the politicians are aware of the role of migrant press in influencing public opinion.. The parties advertised their party programmes in Prizma in order to get the minority votes. But after the Elections they do not show any interests ” she stated echoing the sentiments of the roughly  120 migrant publications in 37 languages whose experiences of  shoes-string budgeting or outright liquidation threats are forever daunting.

Sesame, a weekly magazine popular with migrants as it was written in simple Swedish folded  up last year at the same time the state-run Swedish Television announced plans to phase out Mosaic, a programme built on highlighting multi-cultural aspirations and enjoys a viewership of 1 milion weekly.

Until the 90’s debates about the statuts of minorities  in Sweden mainly refugees – like many other Western countries – tended to centre on exclusions in  jobs, housing, schools, discrimination and racism issues that Sweden’s liberal policy rated rather well compared to some of her neighbours as Finland for example. But with the collapse of the Berlin Wall, the Internet revolution and globalisation, the spotlight has shifted onto the identities, intellectual and cultural exclusion of the minorities from the mainstream media and other centres of power. The concept of “migrant ghettos” assumed new dimensions mirrored not by the protests of restless youths but rather the growing “information divides”.Press reports depicted migrant neighbourhoods fitted with discs for satelitte TV to tap home news;  readership of Swedish newspapers at its lowest. So when a fatal fire struck a discotheque claiming victims from minority backgrounds the lack of information channels in minority languages compounded the tragedy.  For those reasons the values of Sweden’s multicultural policies have sharply focussed  on one hand  the negative stereotype images portrayed by Sweden’s mainstream media and on the other  the invisibility of migrants  in positive contexts. In the words of Swedish media scholar Ylva Brune:” Sweden is a segregated society and the Swedish media reinforces this segregation ”she wrote in the hard-hitting anthology Black Magic in White Media published during the European Union Against Racism about 5 years ago.

Partly in response to the academic and public debate, the minister of culture, Marita Ulskog commissioned the Swedish Press Subsidies Council to research the subject. Carried by Swedish journalist Lise Blomqvist the findings of the assignment published in a book titled Minority Media came out last September.

Minority Media is the first major official documentation of the sector and it looks into the types of  information channels owned by  various communities as the  Sami – Sweden’s original indigenous settlers – to the more recent newcomers as the Somalians and Bosnians. Among the conclusions drawn by Ms Blomqvist and other analysts the report emphases the importance of situating migration in a historical perspective, the various roles the ethnic media plays in building multicultural society and the need to design firm  policy strategies that can deal with the insecurities of migrant journalism in a long-term manner so as to make them financially sustainable and an intergral part of Sweden’s national heritage.

By highlighting the fact Sweden was once a poor country and nearly a third of its 8 population left for the United States 100 years ago, Ms Blomqvist’s report underlined an aspect of Sweden’s official policy that, unlike other European countries especially those with ex-colonies as Britain and France,  encourages a positive view of migration as a natural, universal and  human process. Given a social climate hardened by economic reforms since Sweden joined the European Union such views, especially when contained in government report, goes along way to boost the confidence of the ethnic minority communities often told to pack up and go home by racists.

However, 5 months since the launch of the report last year there’s now a growing disenchantment because the Swedish government has not addressed some of the findings as expected.

Though praising the report and particularly the journalists producing them Ms Ulskog stopped short of revealing if any policy measures have been decided: “ The big problem is of course the very hard struggle so many dedicated people have had to put up to be able to finance and run these media projects.  It is too early  to say what can be done about this and how. We are now in the beginning of a  process of looking at different ways to continue our efforts concerning minority media”she noted in response to a question of relaxing the Press Subsidies regulations that would have made it possible for publications as Prism to get direct financial assistance regularly.

The minister’s position may not come as great relief for the minority media practitioners although it may be seen as an opportunity to to get the ball rolling. This is the view of  Joe Frans, a member of the ruling Social Democratic Party who was elected to the of Swedish Parliament last September. A former jounalist and originally from Ghana Mr Frans says he is prepared to take up the Press Subsidies matter with Ms Ulskog. He  hopes to strengthen her hand as he does not doubt her beliefs.

He told IOC in a telephone interview:

“The cause is simple in the sense that Swedish Press Subsidies are there to support diversity in the media and the freedom of speech. This country is proud of this tradition and small communities like Båros and Växjö of only a few thousands of people have been able to start and run their local newspapers. This is the same with political parties. Since the ethnic minority media represents the small communities the same principle should apply. If papers like SvD gets half a billion annually in tax-payers it’s a question of justice when small players are denied this public service”

With his background in anti-racism  campaigns, Franz’s involvement could provide the much neede impetus  and credibility of leadership the ethnic minority media requires. Despite the initiatives the ethnic minority groups have often been faulted for not being united enough to push for their rights compared to the womens and working class movements that not so so long ago were as marginalised as migrants of today.

The implementation of Ethnic Media report will go along way in infleuncing the acrtions of organisations such as the Swedish Union of Journalists: “ Not enough has been done but we are aware of the problem facing ethnic minority journalists. We are prepared to seek new ideas of working to provide solidarity although there are severe limitations to what a union can do with such vast unemployment in the media sector as a whole” stated Anita Wallberg, the Union’s international secterary. 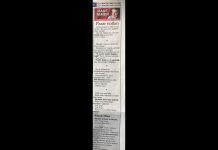 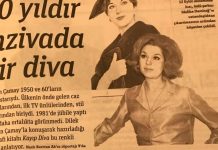